Bloggerette Extraordinaire. Blogging the stuff in her brain one blog post at a time. 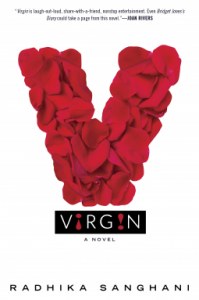 The synopsis sounded fun but what made me decide to read this book was JOAN RIVERS (may she rest in peace). I mean if a comedian like Ms. Rivers recommends this book, it must be something funny that can be missed. Kudos to the marketing people for getting Ms. Rivers’ quote.

Virgin is the story of Ellie Kolstakis, a 21-year-old senior in college who holds an embarrassing-to-her secret: she is a virgin and it absolutely shames her to be one.

Ellie blames her virginity on her “controlling” parents, her plain looks, and a boy named James Martell who had the sense of telling her that her first time should be special and that he was not going to be the one to ruin it for her. Somehow that traumatized her and she never did anything to change the status of her hymen after that.

But now that she’s a senior she decides it’s her last chance to change that once and for all. So she makes it her goal to lose her virginity before graduation. I usually write spoiler free reviews but with this one I can’t. Long-story short, she finally has sex with the wrong guy and ends up getting chlamydia, which she thinks is fine and dandy because she finally can have the words “sexually active” on her medical records, she can “happily” ask for an STD test on her doctor’s appointment and “everybody has it”.

As for me, most of the time, I didn’t know if I was supposed to feel sorry for Ellie or laugh at the things she went through. There were some fun things to read, her reference to Chaka Khan after she finally lost her virginity was of course fun but there was some ridiculous things that sound too impossible for a 21-year-old of our times to go through, and there was stuff like a bathroom incident that was rather disgusting to read.

Even though Ellie’s adventures to losing her virginity were written as a comedy, the author ended up making Ellie look dumb, desperate and utterly irresponsible.

First of all, Ellie thinks that being a virgin is a tragic deplorable thing for a 21 year-old “woman”. What kind of sex ed did this girl get? For a senior in college, hasn’t she had plenty of time to go on the internet and do research on virginity to get her ideas straight?

Second, her reason for losing her virginity is stupid. This girl is obsessed on losing her “V plate” because she wants her medical records to say that she is sexually active and she needs to be able to get tested for STD’s, like she’s abnormal because she can’t request an STD test. She’d rather get and embrace STD’s than be a virgin:

Embrace any STDs you may or may not have, along with the regrets, the disastrous stories, the heartbreak, the pain and the regret. Because if it weren’t for all this stuff, life would be pretty dull. – From Virgin by Radhika Sanghani

What is the matter with this author and publishing company? Who in their right mind would let young readers think that it is a normal rite of passage to get STD’s because without them your life is dull? Any disease is an abnormal condition with serious life altering consequences. STD’s are not to be taken ever so lightly.

Third, Ellie’s concept of virginity and the loss of it. The whole point of her mission was to have her hymen penetrated by a male sexual organ for the first time, but before that happens she fingers herself ends up losing her virginity to herself because she thought it would be “so embarrassing” to bleed on your first time. Oh and let’s not forget that she had previously blogged about inserting a bullet and how bad it felt. Yes, I had to be that graphic but there was no other way of saying it (and it is described in detail in the book, in an almost step by step way). Anyway, how dumb is this character?

Fourth, the Vagina-Vulva Conundrum: I think we need to get something straight and stop using the word vagina to refer to the vulva. I know it’s the colloquial use of the word but this has gone far enough in society. Besides, if the author is writing a book in which sexuality is a main subject, the correct use of words is a must, especially when probably the majority of readers of this book are not only reading this because it’s fun but because they probably expect to get more knowledge on sex by reading this book. The author constantly refers to shaving or waxing vaginas. As far as I know, you don’t have any pubic hair on your vagina. How can you shave or wax your vagina? If waxing your vulva is painful, I can’t imagine the torture it would be to try to shave or wax your insides. Oh and don’t get me started on the reasons she had for waxing, it was not about her but about what she thought men want or think. *eyeroll*

I could keep going but I’ve already exceeded my 1000 word limit for my reviews so I’ll start to wrap it up.

The good part of this book is that it talks about “taboo-ish” topics that should be talked more often and more openly so we don’t end up with a world full of idiotic misinformed 21-year-olds like Ellie. The bad is that it is full of wrong ideas that the younger population will take the wrong way if they don’t have the proper guidance. So as far as recommending this book, I’d say it is for the college audience, who are old enough to see beyond the ridiculousness and will just read this book for the laughs. Of course, because of the sexual subject, there would be a lot of teenagers attracted to this book, young minds who should not read this book without proper parental guidance.

With this review I’m not saying do not read this book. On the contrary, I hope that those who actually finish reading this book don’t find Ellie’s character relatable. I hope readers learn important lessons out of Ellie’s ridiculously stupid mistakes. I hope that if there are virgins reading this book, they

1. get motivated to research more about sexuality,

2. understand that losing your virginity is a personal choice not an obligation or something that must be done for the sake of it, and

3. learn to make sexual decisions that will keep you above all HEALTHFUL, SAFE and happy forever.

Buy on Amazon US

I received aN Electronic copy of this book but was not financially compensated in any way nor obliged to review. The opinions expressed are my own and are based on my personal experience while reading it. This post contains affiliate links

Mademoiselle: Coco Chanel and the Pulse of History by Rhonda K. Garelick